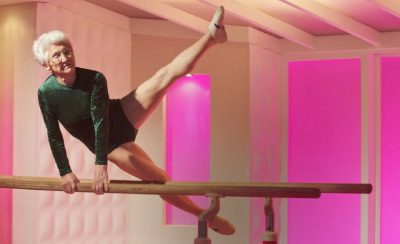 “If you are fit, it is easier to master life,” Ms Quaas told The Sunday Times in an interview, which was translated into Enlgish through an interpreter.

She works to give older people that message as she travels around the world for demonstrations and competitions, encouraging them to stay youthful through exercise and movement.

She has been included in the International Gymnastics Hall of Fame, and was listed in the 2013 Guinness Book of Records as the world’s oldest gymnast.

On top of that, two years ago, she jumped out of a plane in honor of Britain’s Queen Elizabeth, who also turned 90 that year, saying, “I wanted to challenge myself and finish what the monarch had started during the London Olympic Games.” She is alluding to the film clip shown during the opening ceremony of the 2012 Games, which depicts the Queen seemingly jumping out of a helicopter with fictional secret agent James Bond. She also said, laughing, “It is much easier to jump out of a plane than to do gymnastics because unlike gymnastics, you don’t have to do anything.”

Ms Quaas was born in Saxony (then East Germany) and first fell in love with gymnastics at school, where she was often seen climbing up and down 5m bars with ease and rolling on the mats doing stunts. She took part in her first competition when she was 10.

Unfortunately, her gymnastics had to be put on hold with the start of World War II, when all children and youth were enlisted to serve Germany in one way or another. Ms Quaas helped out with farming work, among other duties.  Even after the war she could not return to gymnastics, since they had been banned in East Germany in favor of focusing more on team sports instead. Ms Quaas decided to play handball and was a member of the team that won the Eastern German Championship in 1954.

Later on, she got married, had three children, and became a gymnastics instructor, until 1982 when, at the age of 57, she met two old friends (one 5 years older than her, the other 4 years younger, both of who have since died) who were fellow gymnasts and the three of them decided they wanted to try training and competing professionally again.

Ms Quaas won a regional competition that year. Since then, she has 11 medals from the German Championships that take place every five years.

In one interview, she explains, “My proudest moment so far was when I was 84 years old and there was no one in my age group competing in the championships. So they put me with the others in the 70-75 age group and I still won by one point.”

Ms. Quaas continues to train almost every day for an hour, and enjoys hiking, swimming and dancing.

The common believe among experts is that gymnasts usually cannot remain in the sport for decades because tendons and ligaments stiffen with age; bodies need to be flexible to absorb force across the joints, and inflexibility invites injury. Ms. Quaas says in response: “On the contrary, I do gymnastics to avoid being susceptible to falls and that is a good preventive tool. I don’t take any pills now and have no illnesses.”

The grandmother of two and great-grandmother of one also does not take any nutritional supplements; instead, she sleeps six hours a day and eats lots of fruit and vegetables. Not surprisingly, due to her German roots, her favorite pastime is whipping up dishes of pork knuckle and sauerkraut. “My face is old but my heart is young. Maybe the day I stop doing gymnastics is the day I die,” she says.

One important lesson that seniors everywhere should take away from Ms. Quaas’ experiences is what she has to say about exercise: “You have to do your exercises again and again and again. When there is movement, there is life.” 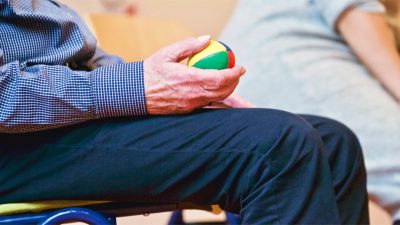 Did you know that more than half a million people over the age of 65 suffer a stroke each year? If you’re recovering from a stroke and suffering major side effects, like problems with hearing or vision, paralysis, balance problems, or difficulty walking or moving around in daily life, Medicare covers rehabilitation services to help you regain your normal functions.

If you need rehabilitation after a stroke, visit Inpatient Rehabilitation Facility Compare to find and compare rehabilitation facilities in your ZIP code. You can compare facilities based on quality of care, like how often patients get infections or pressure ulcers.

There are certain risk factors that can increase your chances of having a recurring stroke, like smoking and drinking, high blood pressure, high cholesterol, diabetes, and bad eating habits. Knowing your risk factors can help prevent a stroke from happening again. You can also prevent 80% of recurring strokes through lifestyle changes and medical interventions. Medicare covers these preventive services that can help you, and in most cases, you’ll pay nothing for these services:

Suffering a stroke can be scary, and for some the recovery can be life changing. Having the resources you need to take control of your health can help you with your recovery and perhaps prevent another stroke. 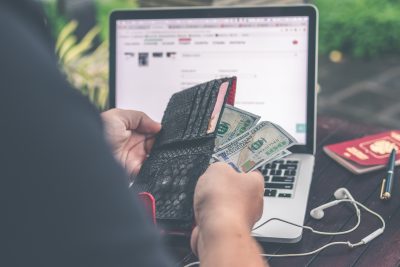 SeniorQuote recently received notice that Cigna will be increasing their premiums in Virginia in less than a month. Below is the official notice, straight from Cigna, regarding the matter:

At Cigna, we are committed to helping customers enjoy a healthy and happy life. That’s why we periodically review our premiums and make adjustments to ensure we are able to provide the products and services they need.

We understand that an increase in premiums can be a concern for seniors, many of whom are on a fixed budget. We are notifying policyholders soon to let them know this change is coming so there is no surprise.

ARLIC rate increases quoted above apply only to policyholders in the Preferred and Standard underwriting classes.

Click here to preview the new rates in Virginia and stay up to date by visiting our ARLIC Rate Adjustments page.

Cigna offers a variety of products to fit your clients’ needs. Make sure to check out our Product Availability Chart for our Medicare Supplement plans.

Cigna’s ARLIC Med Supp plans provide all the basic benefits of a normal Med Supp plan, including freedom to choose doctors and hospitals and nationwide coverage, along with these additional features and rate options:1